Muna (40) and Aisa (50) Hagahla woke up on Monday 3 October 2011 to realize this was the day on which they would lose all their land.  At 6:00 their village was cordoned off  so that nothing could enter except the bulldozers and soldiers.

We received the call after our checkpoint duty (we got up at 3:00 for this) and arrived in Al Walaja at 14:00. By then about 50 mature olive trees had already been uprooted to make way for a new Israelis-only road and the Wall.

The family’s land (in fact their livelihood) was confiscated (without compensation) for the extension of the illegal Israeli Wall and a new Israeli-only road. All of this on Palestinian land. And all of this whilst the Israeli Defence Force (armed soldiers) were watching (us). 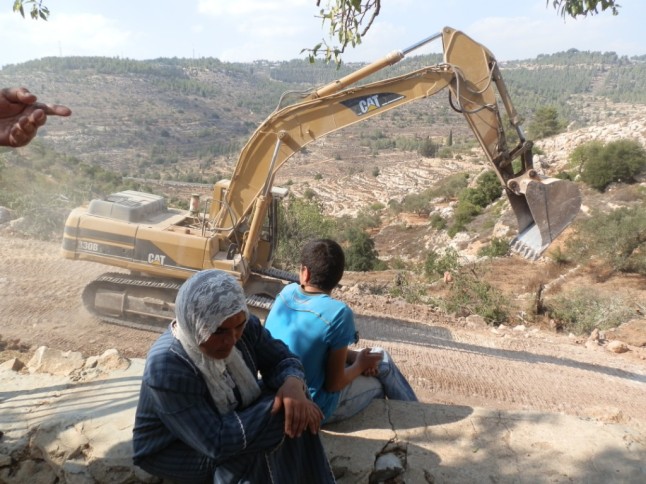 Of course the Hagahlas, like so many other Palestinians in similar situations, appealed to the court when they were informed that the illegal Israeli Wall would separate their land from them. The trouble is, this is an Israeli court (which basically means they had to ask their oppressor to not oppress them), and on top of that, it is a military court (so the agenda is unlikely to be in their favour as Israel has been confiscating fertile agricultural land long since).  The Hagahlas’ request was denied, as were most of the approximately 520 similar cases from Palestinians up to then.

On that summer day we sat on stones in the shade of a tree with the family – the father, the mother, the children, the uncles and aunts and their children – watching the bulldozer’s yellow tentacle lifting the limbs of uprooted trees through dusty air.

“Where can I go?” asked Muna. “The Israelis talk about human rights, but they don’t respect them.  This land is our livelihood. We eat from it and we sell the rest to buy other things. Look – the trees are full of olives.  This land has been in my family for six generations. My husband is angry as there is no-one who stops the Israelis. What do we now have for our children? In Israel they say that we are the wolf and they are the lamb, but look – this is how it is since 1948. Israel uses the security argument for everything, but they don’t care about us. They now build as much as they can before we become a state so that they can say ‘this too belongs to us’.” 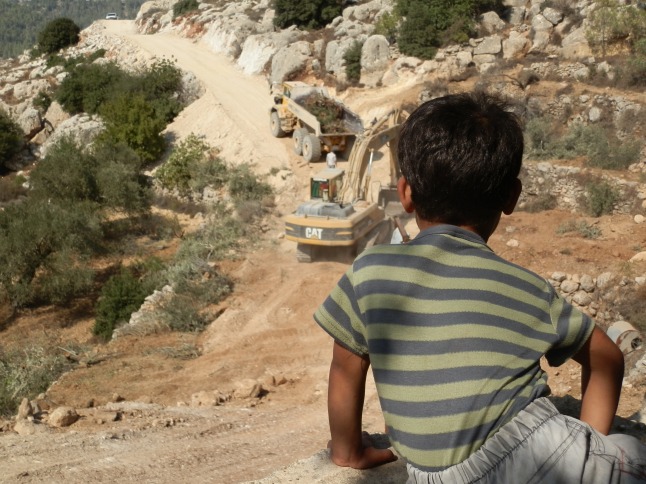 What could we do? The olives on the other side of the road were ripe and there was dust in the air. We simply sat with the family until it grew quiet, the grainy air settled, and the armed soldier who watched us from the opposite hill, left.  And then the wind came up.

I had no words. I took pictures and felt a hole, a blackness, something like a senseless death. 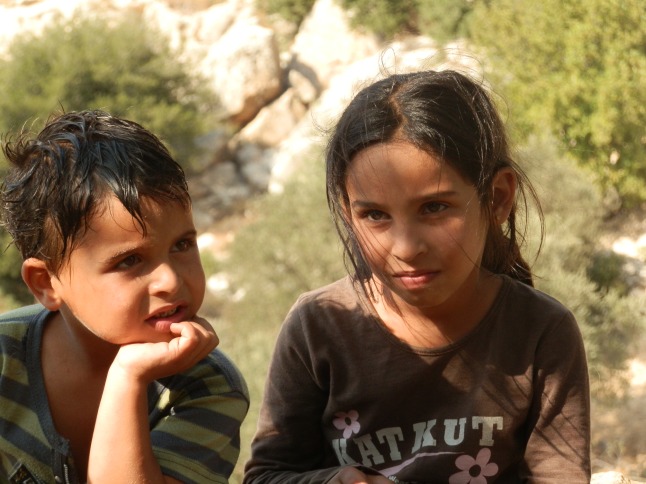 Aisa looked at me and my EAPPI colleague Alicia – both of us from South Africa.  Alicia said that if things changed for us, then perhaps it could change for them too.”

“Insh’Allah” he replied (“God willing”). I felt tears spilling over in my throat and in my nose and I turned away.  The wind blew over the now damaged signboard of World Vision:

The Wall which is continued to be built through and around Al Walaja will eventually enclose the entire village, confiscating all agricultural land.

I told the family that I would share their story.  They thanked me. Now I have done so, but to the Hagahlas it makes no difference.

What the law says:

International law (Articles 47 and 49 of the Fourth Geneva Convention) prohibits an occupying power to confiscate private property and transfer the ownership to such occupying power. On 1 March 1980 the UN explicitly stated that the measures taken by Israel to alter the physical character and demographic composition of the West Bank, including the construction of settlements and all the deviances from the Green Line (the internationally agreed border between Palestine and Israel), violate international humanitarian law.

The picturesque village of Al Walaja, west of Bethlehem, was completely destroyed in the 1948 war, turning many inhabitants into refugees.  Some of them chose to return.  They built new houses and started again. Yet these people had since received numerous demolition orders, of which many were executed.  The agenda is clear: Israel wants the people of Al Walaja to leave their houses and their farmland. Israel wants the land, not the people.

The Bethlehem governorate comprises 660 km2, but Palestinians have control of only 13% of the land, much of it fragmented. In Bethlehem alone there are 22 Illegal Israeli settlements with 26 outposts.  Just a few days after 23 September 2011 and Netanyahu’s talk about “peace” he announced the expansion of Gilo by 1500 housing units near Bethlehem.

Because of the continued expansion of illegal Israeli settlements, the Wall, the numerous checkpoints, the Israeli-only roads and the declaring of seam or no-man zones, most of this land, including access to the Dead Sea, is forbidden to Palestinians.  This means that Bethlehem’s potential for residential and industrial expansion and its access to natural resources is severely limited.  Within the city, once thriving businesses such as those near the Church of Nativity or Rachel’s Tomb have closed as a direct result of the Israeli Wall and Occupation.

Sadly, many tourists and Christian pilgrims who are deeply moved by being in the place where Christ was born are never exposed to the harsh effects that the indigenous Palestinian Christian and Muslim inhabitants endure.  Foreign tour guides generally steer away from the Wall and its separation of a people in a city that gave birth to a messenger of human dignity, inclusivity and love.

9 thoughts on “We watched until the wind came up”