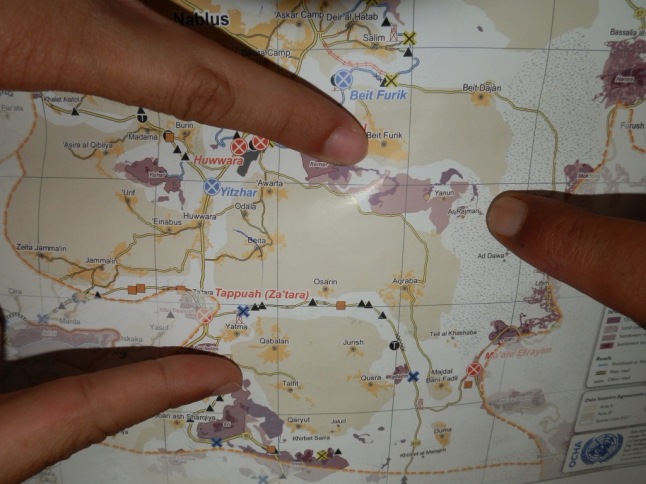 The ever increasing number of illegal Israeli settlements and their outposts may ultimately stretch like tentacles around all the West Bank villages to isolate them from one another.

The purple fields on the United Nations map above show some of the illegal Israeli settlements in the West Bank, Palestine.  Note, for example, how the village of Yanoun in the north is totally surrounded by outposts of the Itamar settlement.

Before 2011, Qusra was not in the news.  But since the beginning of that year armed Israelis from the illegal settlement Shilo and its outposts Eli and Eish Qadeesh have started to enter the Palestinian village to harass the townsfolk and damage their property.

My encounter with Qusra started in September 2011. During the course of this month alone, Israeli settlers:

I went to the funeral of the young man who was killed, not knowing what to expect as this was only the second day after my team and I started our service term in this area.  This is what I found… men praying over and over again in an open field next to the olive groves:

A boy watched intently as men pray at the funeral of a villager killed by the IDF on 23 September 2011 after settlers invaded Qusra and damaged the olive groves.  Unarmed villagers, with the broken branches of their trees in their hands, tried to chase the settlers away. But they were shot at and five more had to be hospitalised.  No Israelis suffered injuries. 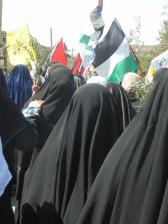 During the funeral the settlers invaded olive groves on another side of the town and damaged 500 more olive trees.

In yet another incident, approximately 200 olive trees were broken or uprooted by settlers on the night of 06.10. 2011. The Israel Defense Force (IDF) were present. They stopped the unarmed Palestininians from entering their fields to safeguard their property and the soldiers did nothing to stop the settlers. In fact, they used flares/ light bombs to light up the area making it easier for settlers to find their way over the rocky terrain. Olives and olive oil are the main of source of income to most Palestinian farmers.

We sat in the shop of Mohammad A.A. Hassan after settlers uprooted and damaged more of the village’s olive trees on 06.11.2011. He rubbed his tired eyes:

Look at this young man who studies at university. We want him to find a job and have a family like everyone else in the rest of the world. We want a normal life, not more, but also not less than others. But now we are sad and angry.  The army uses live bullets, rubber bullets and teargas and we throw stones.  But this can’t liberate our land. We need the help of the world.  We are waiting for this.

I turned to the young man he pointed to, an IT specialist, who started to talk:

I have many internet friends all over the world who have very nice lives. I don’t want that, I just want a simple life here.  I have in my heart that Palestine will one day be free. I am optimistic. I don’t want to kill settlers.

Some of my friends are settlers because they used to come into the town to buy things before the new outpost was there. I asked one of them if he can smell this soil, as for me, it is like heroine, I breathe it in. He started to cry. He said they were promised a good life in this land, but he cannot smell this soil and he doesn’t know the names of the plants. He told me that I am a good man.  He is from California and he thinks his life here is bullshit, but his parents came here to have a good life. He wants to return to California.  I told him that if he wants to stay, he should stay.  We are all human and we can all live here.  Just don’t burn our olive trees, I asked.

On another day a soldier at a checkpoint called me a terrorist. I said I wanted to ask him just one question and then he may shoot me if he thinks it is necessary.  I asked him where was his father born.  At first he got angry and called five more armed soldiers. But I just looked at him and asked him the same thing again.  Then he saw me as a human being. He sat down for a long, long time and said nothing.  Then he looked at me and said he knows I am not a terrorist.  I felt that this soldier has a heart and a mind.

I trust my friends who are Israelis.  They all say to me that this is my land.

Do you know how we greet one another in the street?  We say assalamu “alaykum which means peace on you.  We say this every time, even if we bump into the same person after five minutes. By doing this, we actually say let there be peace for all everywhere.

The younger Mohammed telling his story to Eduardo, my fellow EA.

3 thoughts on “It is possible, we CAN live together”