According to international law, the civilians of an occupier may not live in the territory it occupies (see Article 46 of The Hague Convention, Article 49, par 6 of the Fourth Geneva Convention, UN Security Council Resolution 465, and the 9 July 2004 ruling of the International Court of Justice in The Hague.)

But what happens in reality?

What is the role of these illegal Israeli settlers?

Take for example, the case of Asira:

The inhabitants of Asira, one of the Palestinian villages south of Nablus in the West Bank,  suffer regular and serious harassment from the outposts of the Israeli Yitzhar settlement.  Since 2008, crops were burnt, Molotov cocktails were thrown, houses were demolished, cars were destroyed, and olive trees were cut down.  In 2011 settlers also started to throw paint bombs at the houses.

My team (EAPPI Team 41, Yanoun group) visited Nahla (37) and her children at their house in September 2011.  Nahla’s husband is a taxi driver, and in fact he once drove us from Ramallah to Za’tara when we left Jerusalem to go to our placements.  He leaves home early in the morning and return late in the evenings.  Their house is somewhat isolated from the rest of the town.  There are beautiful red roses in the garden.

Nahla and two of her children, note the mesh to protect the window 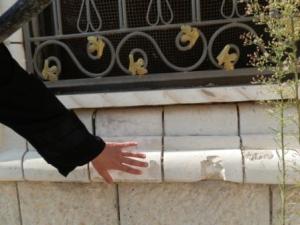 On average, settlers harasses this family three times a week, but sometimes it is more.  The star of David and the word SAM are sprayed all over their house’s exterior walls… there are also fire marks… the windows are all protected by mesh… in many, many places stonework are damaged by bullets…

Nahla talked to us with a weary smile. She gave us cool drinks, and later, some coffee.

The family took a loan for a fence to safeguard their house.  Now they need an additional 5000 NIS (about R10 000) to get a permit to build the fence around the house.

As I listened to her, I felt weary too…

All Israeli settlements in the West Bank are in complete violation of international law.

Christians across the world often confuse the Israel of the Bible with the current state of Israel.  And so uninformed Christians uphold a theology of exclusivity and deny Palestinians the land given to them by the United Nations in 1948. Such Christians forget that Palestinians had absolutely nothing to do with the terrible Holocaust. They view Palestinians as faceless terrorists and turn a blind eye when Israel takes more and more of this land. We forget that there are Christians too in Palestine. We think it is fine if the Palestinians have only 22% left of what was given to them in 1948. We agree that Israel may occupy, in multiple, institutionalised, degrading ways, a further 60% of the 22% in the West Bank. Ghaza too is like a open air prison since Israel controls the air space, the sea fare and access on land.

We use the Bible to justify suppression.  Through us, the unthinkable becomes normal. Because we cannot imagine Israel being guilty of crimes against humanity – it simply feels wrong.  Weren’t they at the receiving side of crimes during the terrible Holocaust?

The thing is, we cannot make judgements based on feelings only. We should also apply our minds and take facts into account.  How can we simply ignore, for example, the alarming statistics on the United Nations Office for the Co-ordination of Humanitarian Affairs’ website?

Let me return to the issue of Israeli settlements in Palestine:

A 1993 agreement signed by PLO leader Yasser Arafat and Israeli Prime Minister Yitzhak Rabin set out a plan for Palestinian self-rule, which was never fully implemented. Israel has continued to expand settlements in the West Bank. Building permits are refused, houses and roads are demolished and military checkpoints prevent citizens to go to churches, mosques, schools and hospitals.

Peace talks came to a standstill precisely due to Israel’s continuous expansion of settlements. Between the start of the peace talks and September 2011, Jewish settlers in the West Bank have doubled:

Many of the Israeli settlers come from different parts of the world (the USA, Canada, Australia, Europe, Russia, Marrocco, South Africa, etc.) and have absolutely no genetic affiliation with the land that dates back to the times of the Old Testament.  They don’t have to understand Hebrew, they just have to be adherents of the Jewish faith tradition. Yet on posters with anti-Arab slogans on the main road between Hebron and Jerusalem hung by settlers on Sunday 26 September 2011,  they claim “This is the land of our fathers and grandfathers” and “This is the land of Israel”.

How can we allow this to happen?  What kind of theology do we choose? Do we want to exclude, or embrace? Why do so many Jews, some of them Israelis and others not, choose to stand up for a free and just Palestine? Is the Israel of the Bible the same place than the modern state of Israel?  By which terms may any religious tradition suppress another people and deny them basic human rights?

May Israelis live in Palestine?

Yet many, many Palestinians I spoke with, reminded me that Jews, Muslims and Christians used to live as neighbours, like brothers and sisters, in peace together for more than a thousand years on the land that was known as Palestine before the state of Israel was declared. Therefore many of these people prefer a one-state solution where there is freedom, equality, dignity and peace for all.

There is so much to say… If you want to know more, do read, for example, Mark Braverman’s excellent book on Christians, Jews and the search for peace in the Holy Land: Fatal Embrace (2010). Mark is an American Jew and one of those who advocate for freedom and justice in Palestine. His book explains his own journey of insight and contains personal and theological reflections.

3 thoughts on “May Israelis live in Palestine?”