“What is your Peace Plan?” they asked Prof. Mazin Qumsiyeh.  His answer consisted of four words.

On Monday 11 March 2013 Qumsiyeh’s public talk in Stellenbosch started by mentioning his own interwoven family history with ties to people in various cultures and religious groups – including Jewish links.

Mazin is an American citizen. Five years ago he returned to Palestine where he now plays an active role in civil society in addition to his academic career in genetics and zoology.

When asked what his “Peace Plan” is, he said it consists of four words:

In the end one would hope for HUMAN DIGNITY too.

After his talk at the Faculty of Theology (and the great introductory talk by Bonga Mbenenge and his remarks on human dignity), a few of us accompanied Prof Qumsiyeh to the nearby lush green botanical gardens.  What a gift it was to share this day in such great company!

The next morning Qumsiyeh had an appointment for an interview on SAFM (a  South African public radio station that broadcasts nationally), but it was cancelled at the very last minute.

Why? As stated in the Palestine Solidarity Campaign’s letter (PSC letter to SABC station manager the Jewish Board of Deputies who first insisted to be part of the discussion in the name of “balance in a sensitive issue” withdrew the evening before the show – and so South Africa’s public broadcaster cancelled the show.

The SABC’s security record for the day will confirm that Mazin Qumsiyeh and I signed in at 08:45. The receptionist’s computer monitor confirmed that Mazin was expected.   The sound engineer on duty can confirm that he took us into a studio, and contacted Johannesburg to advise that Mazin was in the studio.  He was then hugely embarrassed to tell Mazin that the programme had been cancelled.

To call the matter between Israel and Palestine in need of “balance on a sensitive matter” displays in my opinion either ignorance or a disregard of international law, human rights and the gross violations thereof by Israel in its occupation of Palestine.

Why not give someone from Palestine a voice? Surely the public can phone in and ask any questions they want?  I think this was an attempt to silence a strong voice who speaks the reason of inclusion and dignity for all in the Middle East. I am deeply ashamed that my country’s public broadcaster’s decision.  In fact, the South African Palestinian Solidarity Campaign called this censorship by the SABC/SAFM:

“unlawful and unconstitutional, violating South Africans’ rights to freedom of expression and access to information.” 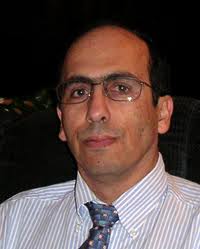 Professor Mazin Qumsiyeh (http://qumsiyeh.org/aboutqumsiyeh) is a Palestinian American of Christian background and was raised in Beit Sahour, the biblical Shepherd’s field just outside of Bethlehem, where he continues to live and work.

Mazin now teaches at Bethlehem University and Birzeit University in molecular genetics and other biology related courses. His worthy blog: http://popular-resistance.blogspot.com/ is informative and analytical regarding the Palestine/Israel conflict.

His academic career started with his Ph.D. in Zoology from Texas Tech University. His later training was in genetics and he served as Associate Professor of Genetics and director of cytogenetic services both at Duke University and Yale University. During his 24 years in USA, he served on the faculties of these Universities.

He has traveled extensively in Jordan, Israel/Palestine, North Africa, East Africa, Europe, and America conducting scientific work and research, and has published over 120 scientific papers in areas ranging from Zoology to Genetics and two books: Mammals of the Holy Land and Bats of Egypt.

As an activist with Palestinian liberation movements, Mazin has served on several organizations’ Boards, authored books and published views and commentaries via the Internet and on websites.

Qumsiyeh being arrested in Al-Walaja 6 May 2010*

*The illegal Israeli Wall confiscates fertile Palestinian land (and the livelihood of families) in Al Walaja, a village in the district of Bethlehem. Most Palestinian men have been detained at least once – often for acts such as protests or stone throwing and often without a formal complaint.