What can unlock victimhood? What can break the cycle of oppression? A visit by a Palestinian theologian to South Africa’s wintery Western Cape gave me some insights.

Dr. Raheb comes from Bethlehem in the West Bank of Palestine – a city under a harsh military rule. Israel’s occupation has a daily effect on the lives of its citizens as minute by minute Israel violates countless human rights laws as opposed to administering the land on behalf, and to the benefit of, the Palestinians as specified by international law. “Occupied” in Bethlehem, as in all of the West Bank, Gaza and East Jerusalem means “oppressed”. But this is not what I want to talk about.

Did we listen to Raheb because he is the most widely published Palestinian theologian to date? Or because he has received many international awards for his work? We listened to him, almost spellbound, but for different reasons. He was invited by the Centre of Christian Spirituality and Kairos Southern Africa to conduct the third Steve de Gruchy memorial lecture in Cape Town, and also held talks at Stellenbosch University and at  the University of the Western Cape. He visited the construction site of the Palestinian Museum – a first for the world, preached to an Anglican congregation in Athlone and shared a meal with members of Cape Town’s Jewish Board of Deputies and some members of the Muslim and Christian communities. 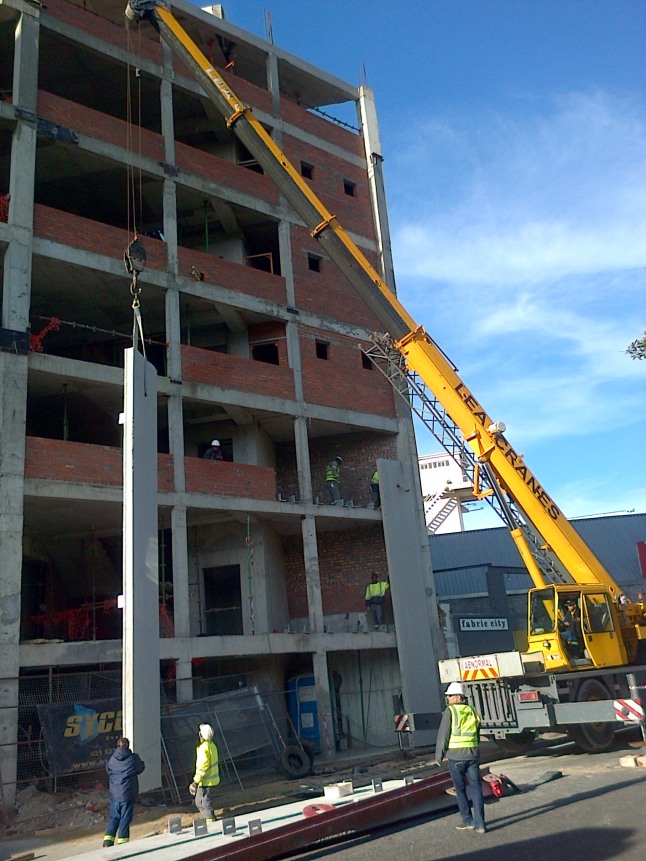 Raheb (left) in conversation with Dr Anwah Naggia (right) at the building site of the world’s first Palestine Museum. The panels in this representation of the Israeli Wall are precise replicas of the originals in the Israeli Wall. They were erected on Saturday, 7 June 2014 in Cape Town.

Why be spell-bound if he sketched a situation where all seems lost? Almost everything is taken by Israel whilst the world powers keep silent. Hope seems almost gone. Israelis and Palestinians have failed to achieve the state project on which they worked so hard to achieve. That is, if they are frank with themselves. The Israeli apartheid system, the Palestinian mini-state in Gaza and the ‘Palestinians ‘holes in the cheese’ of the West Bank are not the dream for which people fought. It is necessary to admit this hard and painful truth and to start looking for new models of co-existence. (Raheb 2014:84). Many of us are already familiar with this depressing story.

The art of survival and starting anew is a highly developed from of expression in Palestine, and one I see daily. People’s lives, businesses, and education are interrupted by wars and the aftermath of wars over and over again, and yet I witness people refusing to give up, taking a deep breath, and beginning again. Logically, it is foolish, and yet there is deep wisdom in such a course of action. I’m often asked by visitors how I can keep going…..The answer to that is not psychological but theological: There is no way to understand and face the status quo but at the logic of God. (Raheb 2014:89)

To have a political solution that entails full and equal citizenship for Palestinians in a state where their rights and dignity are protected and valued, is a long overdue and a practical necessity he argues. But the question “When will we have a state?” is by far not the only one. More important is to envisage what will bring peace and dignity that outlasts any empire or any state. This answer he finds in his interpretation of the Bible. Although Raheb explains his perspective in Christian terms, I would like to think that the principles may also apply to those from other faith traditions who aspire to human dignity.

Through his interpretation of the Bible, Raheb transcends victimhood. By not defining defeat by the empire as the ultimate defeat, the sting is gone and a new beginning is possible. To Raheb Jesus’ mission was to restore a sense of community and to empower people to become ambassadors of his much wider kingdom. This is the territory we should aspire to! Such healing of the self, on a very deep level of existential belonging, is the very thing that creates space within oneself and for others. If we have enough space to both receive and give grace, we can stop the vicious cycle of oppression. 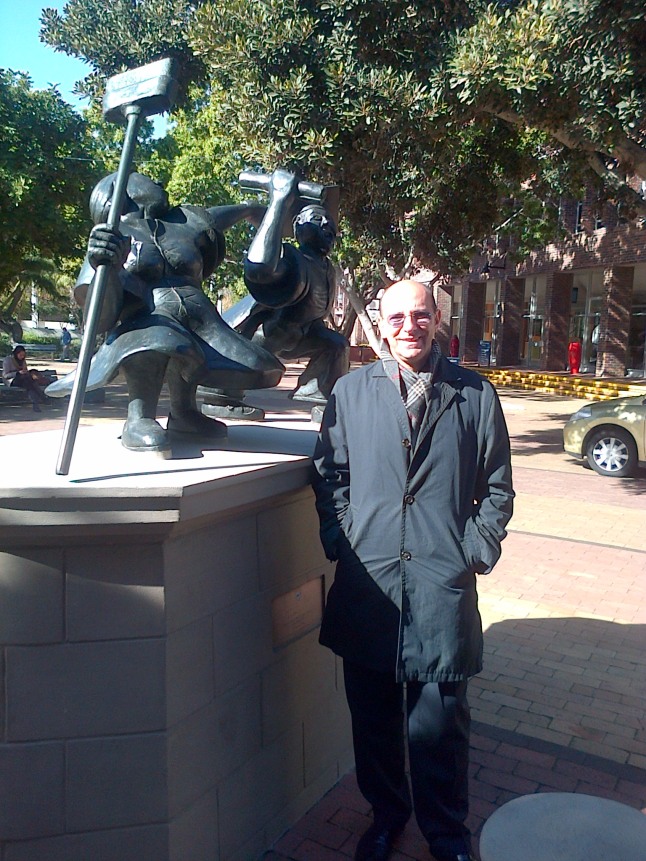 This statue at the University of the Western Cape depicts the joy and pride of a mother (a domestic worker) at the graduation of her son. It is symbol of defeating systemic oppression (apartheid).

It is almost impossible to convey all that he said in a few words here. If you decide to order his latest book Faith in the Face of Empire, you will not be disappointed. It is available on Amazon and on Kalahari (for South Africans).

I first met him in April 2011 when he formed part of the Kairos Palestine delegation that launched the Afrikaans version of their statement: A Moment of Truth and in December 2012 I listened to his address at the Kairos for Global Justice conference. His publications include 16 books of which the latest Faith in the Face of Empire: The Bible through Palestinian Eyes (2014, Maryknoll: Orbis Books) is a challenging view of how the reality of empire shapes the context of the biblical story and the ongoing experience of Middle East conflict.

Dr. Raheb’s work has received wide media attention from major international media including CNN, ABC, CBS, 60 Minutes, BBC, ARD, ZDF, DW, BR, Premiere, Raiuno, Stern, The Economist, Newsweek, and Vanity Fair. He has also received several awards for his work. For his interfaith work towards peace in Israel-Palestine he received the “International Mohammad Nafi Tschelebi Peace Award” of the Central Islam Archive in Germany (2006); for his ‘distinguished service to church and society’ the Wittenberg Award from the Luther Centre (2003); and for his ‘outstanding contribution to Christian education through research and publication’ an honorary doctorate from Concordia University in Chicago (2003).