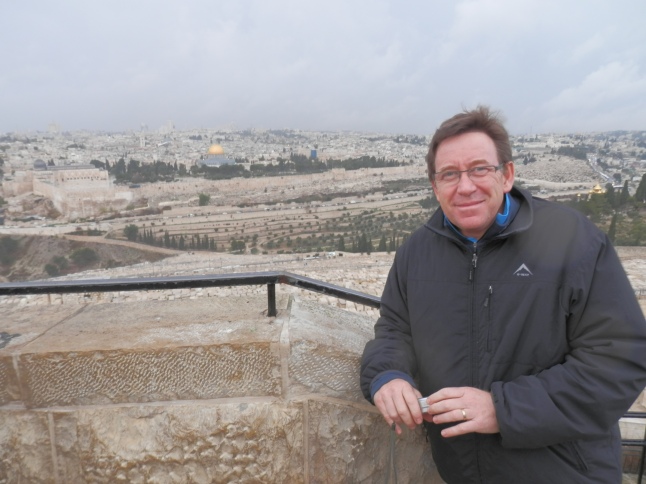 “(T)he majority of ordinary people, both Israelis and Palestinians, are sick and tired of the conflict and want to move on.”

In an opinion article in the Jerusalem Post published on Thursday 12 June 2014, Dr Hanekom shared some of his impressions after a recent visit to Israel and the West Bank of Palestine. It was his second visit to the area. In December 2012 he formed part of a delegation of senior clergy that also visited Palestine and Israel. At the time Dr Hanekom commented as follows:

“It was a tremendous privilege to visit Palestine in this time of Advent. I am more convinced than before that the non-violent alternative of faith, hope and love that the Palestinian Christians show us is the way forward.” 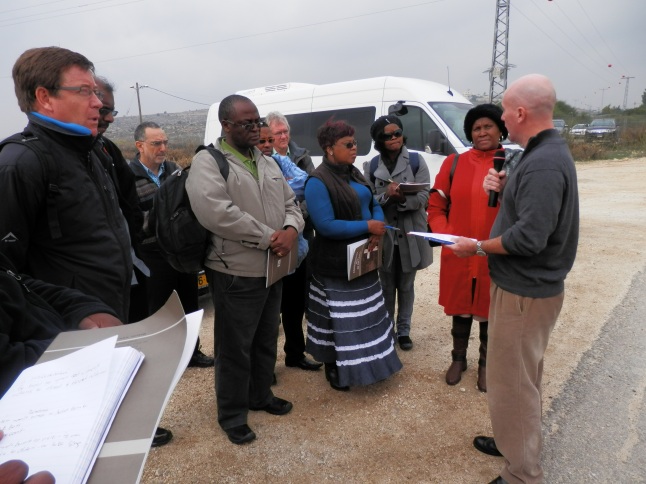 Hanekom (far left), listening to a human rights attorney talking on the circumstances of Palestinian children in Israeli prisons.

When FW de Klerk warned about apartheid in Israel, Mohammed Madani, a senior Palestinian official in charge of outreach to Israeli society said:

“When the leader of the former apartheid regime in South Africa warns Israel of going down the road to this style, it should listen to him carefully because he knows what he is talking about.”

I am keen to hear how you perceive the following article by Dr Hanekom:

After 20 years of democracy in South Africa, I still see the psychological scars of the struggle. I recognize similar patterns in Israel and Palestine.
Finding a solution is not the end of a problem but the key to a new and sometimes difficult journey… but then a journey with hope.

It is always difficult and dangerous to try to be a prophet and broker a peace process after a relatively short exposure to any conflict. Recent political developments also filled many people with despair about the future. So let me first clarify my position: I don’t want to be a judge and I have been part of enough conversations to understand how difficult and dangerous it becomes when you engage in tit for tat arguments on who is right or wrong. Although I do have some very concrete ideas on the way forward, I am not a politician and would therefore refrain from giving any detailed ideas on policies and strategies. What I would like to do, is to give a South African perspective on some personal observations and maybe one or two long term strategies.

After 20 years of democracy in South Africa, I still see the psychological scars of the struggle. I could not help but recognize similar patterns in Israel and Palestine.

It already looks ominous and is of great concern to me. One must understand that irrespective of the political solutions that are found, the real healing will take place on a humane and psychological level.

I may be wrong, but as an outsider, it seems to me that the majority of ordinary people, both Israelis and Palestinians, are sick and tired of the conflict and want to move on. Unfortunately they are held hostage by politicians and extremists. I wonder what the result of a free referendum would be, even though some people would argue that such a referendum is impossible.

I believe however that we must immediately start an extensive process of dialogue between a younger generation of Palestinians and Israelis. That does not mean that any political process must be stopped or delayed. Many years ago, believe it or not, there were similar initiatives in SA that were stopped by the Nationalist Party government! Surely international funds could be made available for such an initiative. A new generation of Palestinians and Jews must be educated to live with a new and more positive understanding of one another.

In SA we have a saying that racism is like “knowledge in the blood.” Children grew up with it. Intervention must come at an early age. But how on earth will they learn to love one another if they are not allowed to meet with one another? Furthermore, I believe that the Israeli education system and the United Nations Relief and Works Agency (UNRWA) who receive international money to help build the Palestine education system, must be monitored very carefully for any ideas or material that might fuel wrong and dangerous perceptions of the other.

I believe that the UN must immediately create a Human Rights Commission / watchdog tasked to monitor any form of hate speech and bring that to the attention of the international community. In SA this has become the norm of the day. Those individuals who continue with their hate speech are our real enemies.

Maybe the most important thing to realize is that neither a one state solution nor a two-state solution will solve anything if the two nations do not reconcile with one another. Their lives are too intertwined and they live in too close proximity to think that a mere separation or a one man, one vote democracy will solve the problem. I have heard the word “reconciliation” not enough during my visits. It will have to become part of the daily rhetoric.

In South Africa, we still continue to work on reconciliation on a daily basis. I firmly believe that Israel and Palestine are home to enough God-fearing Jews and Muslim people who understand the principle of human dignity and mutual respect. May we bring them together and rally them for the common good of everyone living in Israel and Palestine.

Dr. Braam Hanekom is the vice moderator of the Dutch Reformed Church in South Africa. It is a church with a million members which once supported Apartheid, but has since then made some radical changes and is currently working industriously on healing, restoration and reconciliation. Dr. Hanekom recently visited both the West Bank and Israel.