In a historic step the United Congregational Church of Southern Africa (UCCSA) issued a clear statement in support of the non-violent Palestinian struggle. The church’s national conference approved the resolution on 10 July 2016.

The declaration names the danger of Christian Zionism and its literal reading of the Bible which confuses the Old Testament’s Israelites with Jewish Israelis. ‘We hear the Palestinian Christians’ appeal for help,’ they say, and we commit our support to the international Boycott, Divestment and Sanctions Campaign. 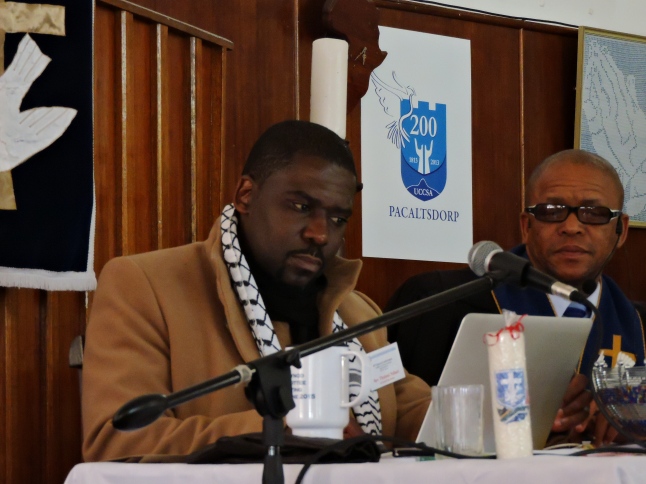 The statement is the first of its kind by a South African church.

Earlier South African Methodists also urged their circuits to “study the Palestinian Kairos Document that calls for divestment of Israel to end the occupation by Israeli in Palestine” (2013 Yearbook, 3.4:93-95). They also encourage those who undertake “Holy Land Pilgrimages” to have meaningful engagements with the Palestinian community. Yet the United Congregational Church of Southern Africa (UCCSA) does not ask people to consider the requests of the Palestinian Kairos Document. UCCSA acknowledges their requests, it affirms the call for creative, non-violent resistance and it commits publically.

What makes it even more historic is the fact that UCCSA was the only South African church who publicly supported the now historic South African Kairos call of 1985.  In it South African theologians asked the world to help end apartheid. The world listened and it helped. In recent years the churches of the world have started to speak up about fundamentalist, Zionist readings of the Bible that support Israel’s oppression of the Palestinians.

The statement by UCCSA on Palestine is a welcome prophetic step. It reads as follows:

We pledge our support to the Palestinian people as follows at this 8th South African Synod Conference of UCCSA in George, South Africa:

The United Congregational Church of Southern Africa is one church in five countries –Botswana, Mozambique, Namibia, South Africa and Zimbabwe. The UCCSA was formed in 1967 but traces its origins back more than 200 years to the arrival of the first missionaries sent by the London Missionary Society to Southern Africa. Today over 500,000 members worship in over one thousand local churches across the five countries.

15 thoughts on “First South African Church to commit to BDS”