Thousands of unarmed Gaza protestors are exposing Israel’s fear of peace to the whole world. 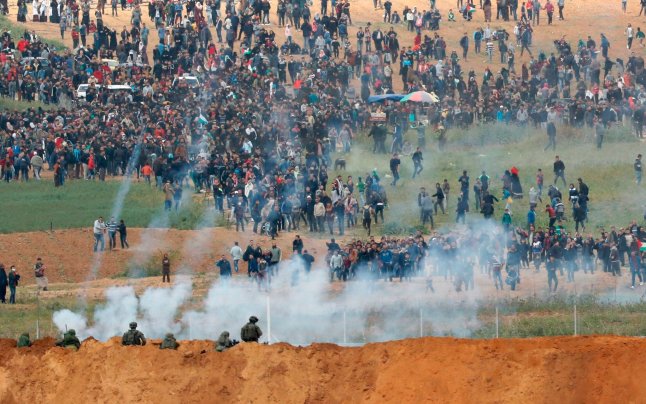 Israel is frightened of real peace.

By today 34 Palestinians in the Gaza strip were killed by Israeli forces, with more than 2,000 injured since the protests began on March 30, 2018.

A collection of Palestinian groups call for real peace. They speak to Palestinian leaders, Israel, the USA, the Arab states, the international community and to you and me. Peace is “an effective weapon”, they say. Israel tries to “transform the peaceful protests of Gazans into a violent confrontation by killing unarmed civilians and injuring thousands”, they say.

Israel does not know how to live in peace or how to create a reality of peace. In an ironic twist, Israel’s entrenched fear and siege ethos is self-destructive and limiting. It leaves the Israeli society in a terrible state of mind. A Jewish Israeli activist who advocate for Palestinian rights (whom I interviewed for my PhD research) described the Israeli state of mind as follows:

The suffering begins with Israeli Palestinian citizens. Then it goes to the Ethiopian citizens and then to the poor. People don’t see the connection. Democracy and occupation don’t go together. If you are used to pushing around and screaming at Palestinians, then you sometimes scream at your children, at your workers, at your wife. There is much more violence in Israeli society. People are racist, not only towards Palestinians, but towards everybody. We see a world where everybody hates us. We [think we] are the victims of the whole world. That’s not very democratic and healthy to still see us as a victim, right? There is also a kind of a distortion of the world-view, because you have to protect yourself as an occupier.

Israel is scared of real peace because it means the many Zionist lies and its crimes against humanity will be exposed. It will destroy the myth of Israel as ‘the underdog’ that came into its own through a ‘miracle’ complemented by the sheer bravery of ‘courageous Jews’ who are ‘up against all these Arab terrorists’. It will no longer keep Israel’s mass displacement and killings of the Palestinians out of history books. It will expose Israel’s so-called ‘greening of the Holy Land’ as a cover up to erase the memories of hundreds of destroyed Palestinian villages.

The Palestinians’ actively embody their commitment in their protests on the border of Gaza  since Land Day on Friday, 30 March 2018. Their statement speaks to the heart of the matter.  It deserves our support: Kairos & civil society Gaza Statement

Make your support public by reading, distributing and talking about their commitment and their call.