To support the Palestinian oppression goes against Christianity’s understanding of justice. In a bold vote for clear actions, the General Council of the World Communion of Reformed Churches (WCRC) made it clear that such theology goes against the heart of the Bible. 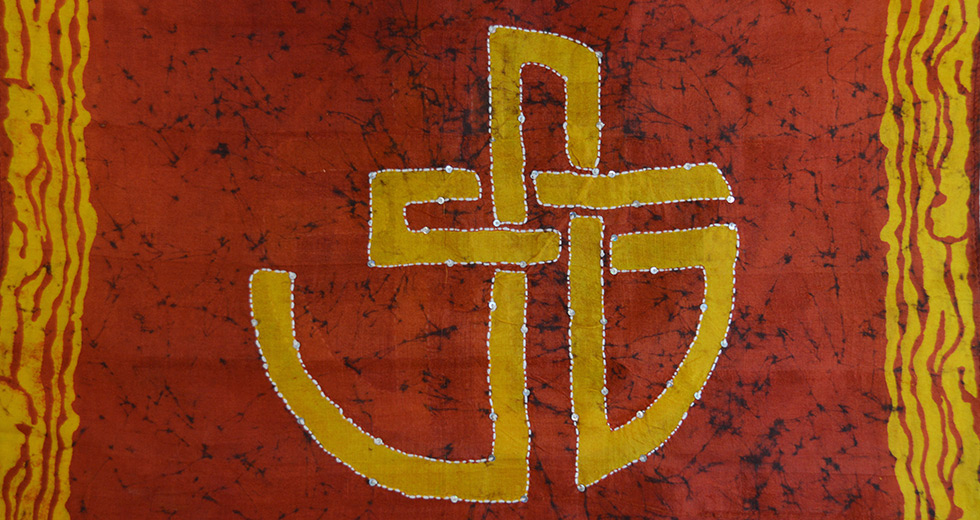 This global body, representing over 80 million Christians, held its 26th General Council from 29 June – 7 July in Leipzig, Germany. As the WCRC’s highest decision-making body the General Council issued a resolution with meaningful, action-driven solidarity and not only words of support.

The 2017 WCRC General Council in session 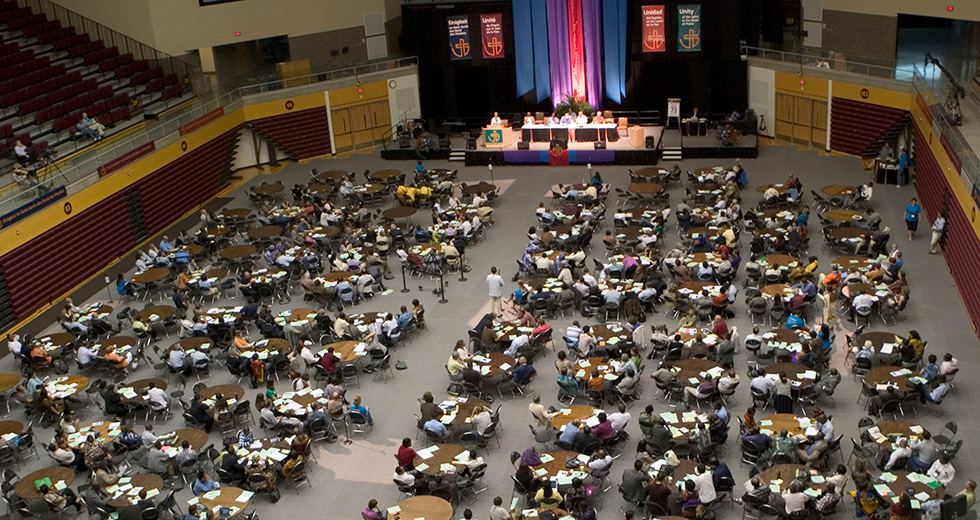 Although many Christians in the world still believe Israel’s lies and/or uphold Zionist theology, the tide is turning. The WCRC General Council stated unequivocally that “the integrity of Christian faith and praxis is at stake” since the Christian faith has been used to justify the oppression of the Palestinians. It rejected any use of the Bible “to legitimize or support political options and positions that are based upon injustice, imposed by one person on another, or by one people on another” as it strips the Word of God of its ”holiness, universality and truth”. The General Council agreed to initiate a programme of study and discernment on the theology used to legitimate the oppression of the Palestinian people, recognizing that such a study might result in the need for “prophetic action”.

Over 30 members from more than 10 countries drafted the proposal that served before the WCRC’s Public Witness Committee. Their proposal was debated and refined by the Committee in several sessions before it served before the delegates in the plenary asking their permission to submit the proposal to a decision making process. This decision was granted and in a next step hundreds of delegates from Asia, the Caribbean, Latin America, Africa, the Pacific, the Middle East, North America and Europe debated the resolution with its action points in discernment groups before casting their votes in a subsequent plenary session. It was most encouraging that the voting was in favour of all six action points in the resolution. Although there was a fair amount of abstentions, no-one voted against any of the points! This means that no-one raised dissent in public.

Delegates voted through a show of cards at the 2017 General Council of the WCRC. Orange cards meant “in favour of” and blue cards signified “not in favour of”, or “uncertain” 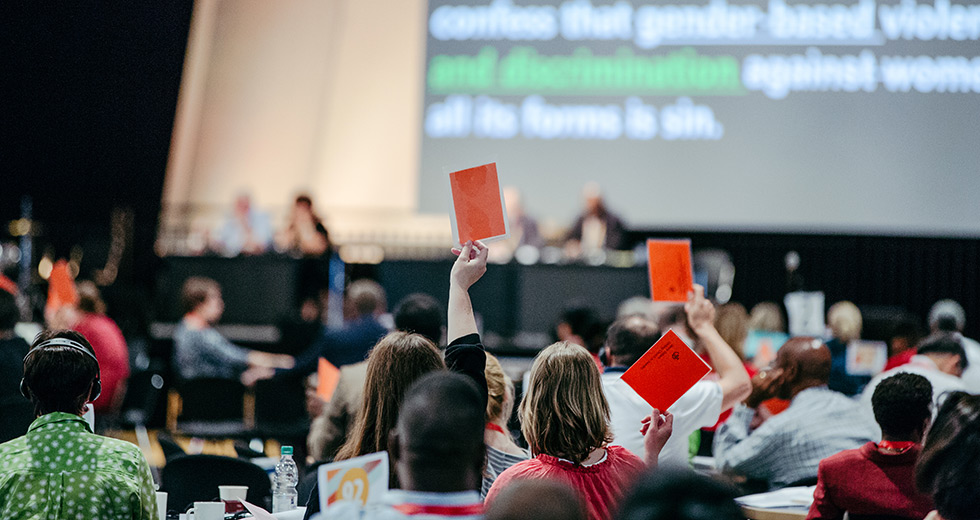 The General Council has urged its 230 member churches in 109 countries to examine their mission, education and investment relationships with Israel and to disseminate to members educational materials on the Palestinian situation. Moreover, they encourage and support delegations to visit the region to connect with the Christian community in Israel and in Palestine, to witness their oppression and to express support for their desire for freedom and self-determination. The WCRC General Council argued that the continuing denial of Palestinian rights does not only jeopardize the dignity of Palestinians, but it has also “cast a shadow over generations of Jewish Israelis who have borne the social, psychological and spiritual burdens of the role of the occupier.” 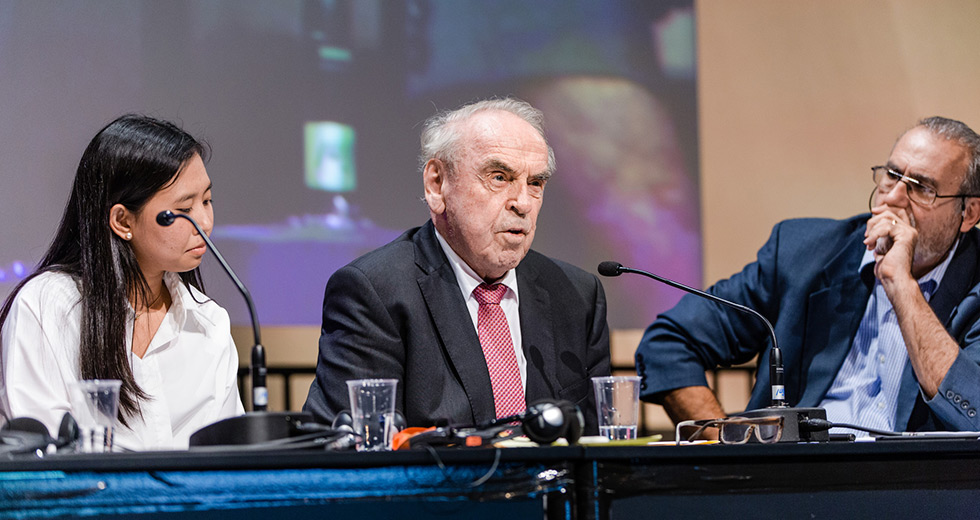 A South African, Rev. Dr Jerry Pillay, from the Uniting Presbyterian Church in Southern Africa served as president of the WCRC at the time of the 2017 General Council. Hearty congratulations to Rev. Najla Kassab, a minister in the National Evangelical Synod of Syria and Lebanon (NESSL) who is the newly elected president of the World Communion of Reformed Churches (WCRC). 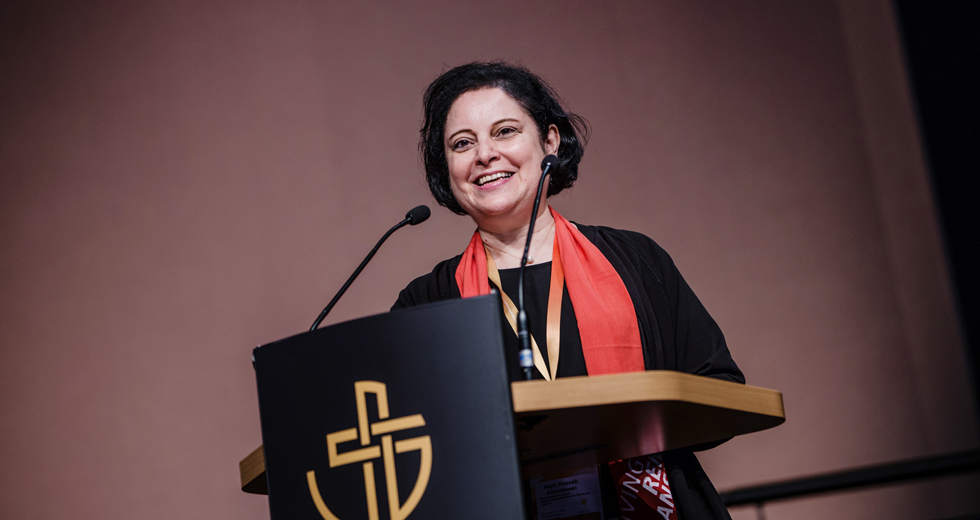 The WCRC decision follows a recent call from South African and Canadian Churches at the World Council of Churches’ Jubilee conference in Bethlehem on 20-22 June 2017. At this meeting they publically recognised Israel’s practices of apartheid and colonialism in respect of Palestine.

It also follows former prophetic actions by Reformed Churches in response to anti-Semitism, racism, and economic injustice. At the General Council in 1982 in Ottawa, Canada, the then World Alliance of Reformed Churches (WARC) declared a status confessionis, declaring South African Apartheid a heresy, an action with global and ecumenical reverberations for ending that racist system. This led directly to the 1986 Belhar Confession of the Dutch Reformed Mission Church in South Africa, declaring that individual, racial and social segregation is sin and incompatible with Christian belief. Belhar has been subsequently adopted by churches in the Reformed tradition in the North. In 1997 in Debrecen, Hungary, the WARC called for the initiation of a processus confessionis with respect to the question of global economic injustice. In 2004, the WARC issued the Accra Confession, which called for “a committed process of recognition, education and confession (processus confessionis) regarding economic injustice and ecological destruction.” 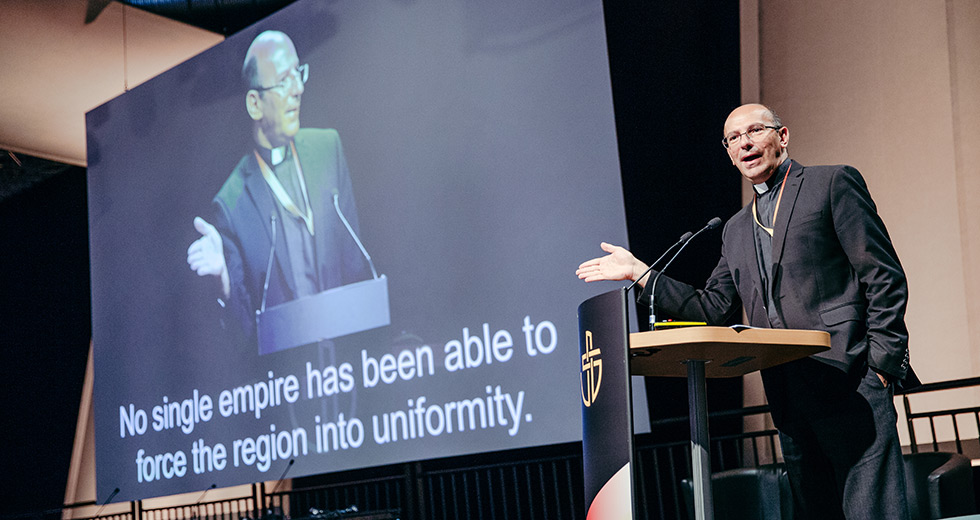 The resolution of the WCRC’s General Council:

PALESTINE – AN URGENT ISSUE OF FAITH FOR THE WORLD COMMUNION

In an open letter to the ecumenical movement published on June 21, 2017, the National Coalition of Christian Organizations in Palestine has called the situation “on the verge of catastrophic collapse” declaring that this is the “last chance to achieve a just peace… and to save the Christian presence in this land.” They have appealed to the world church for costly solidarity with them to end their oppression and gain their freedom, through solidarity visits, reviewing theology, economic actions, and support for their freedom to exercise their religious, social and political rights.

Many of us have seen with our eyes and heard with our ears the painful realities of life for Palestinians. We have been witness to the daily, grinding humiliation of women, men and children; the deaths of civilians; the demolition of homes; the confiscation of water resources; the isolation and ongoing diminution of the Palestinian population of Jerusalem; severe restrictions on freedom of movement, education, commerce, electricity, healthcare, and access to holy places; the unlawful practice of administrative detention, including of children; and the taking of land through the construction of illegal settlements and a separation wall built on Palestinian land. Palestinians who live in the State of Israel, while citizens with the obligations of citizenship, also suffer injustice through discriminatory policies in housing, employment, and more. The re-configuration of Jerusalem in particular jeopardizes the historical place and shared identity of Jerusalem, which is part of its holiness.

We acknowledge and confess that the Christian faith has been used to justify the injustice against the Palestinian people.  Any use of the Bible to legitimize or support political options and positions that are based upon injustice, imposed by one person on another, or by one people on another, strip the Word of God of its holiness, its universality and truth. All who suffer share in the groaning of the Holy Spirit for the liberation of all peoples and their joining in one spiritual communion. The ongoing condition of occupation, and the continuing denial of Palestinian rights has cast a shadow over generations of Jewish Israelis who have borne the social, psychological and spiritual burdens of the role of occupier.